A really fine movie. It's worth seeing just for Sterling Hayden, but the whole thing excels. The script is great, it looks great, the acting is great. It's said to be one of the first heist movies, and it makes you understand how the whole sub-genre could come from it. As a side note for comedy fans, if you're wondering how to stop seeing Louis Calhern only as Trentino (see below) from Duck Soup or Jean Hagen (also see below) only as Lina Lamont from Singin' in the Rain, this movie will do it. Finally, if you want to see how good acting can be disturbing without being the least bit explicit, wait for the scene with Sam Jaffe as (Doc Riedenschneider) near the end.

Finally, Stanley Kubrick must have really liked this movie. See The Killing for why I think that.

The Asphalt Jungle at IMDB.

P.S. If you've forgotten who Trentino is, he's the one on the right: 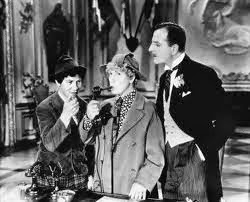 If you've forgotten who Lina Lamont is (again, on the right -- in the white, not the cop):